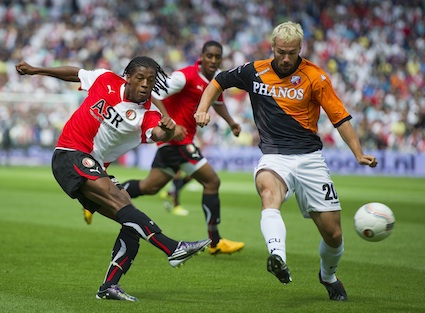 Spring/simmer is a great time at the TLA. Why? TLA soccer is soon to start. With TLA soccer we provide players with a complete athletic package. We teach players dynamic movement, develop strength, learn nutrition, & regenerate the players physical state from their previous season endeavors. TLA soccer happens in the best of weather & part of the overall package includes competitive player challenges with games like Footie tennis combined with a great atmosphere and the best environment for players to thrive so they can truly perform for the upcoming season.

Jacob Lensky was the first youth player to excel in the TLA. That was eight years ago. In this time our programming has changed a great deal. Back then we did ladder work & parachutes as part of our movement drills. Quickly, we realized these were circus tools and largely ineffective. Instead they have been replaced by teaching movement (including foot placement, shoulder positioning, and now with the IPad instant large screen video feedback), sled drills teaching body mechanics, and emphasis on loosening (regeneration) the body for maximum acceleration. When they grasp these concepts we move onto balance.

In-between movement development we use the many skill drills which I designed in the Micro FC Footie Manual. (A 50 page booklet which by the way is for sale for $20) Players love combining the practical game like footie drills from the manual with the movement skills they are busy developing.

As part of TLA soccer we also introduce nutrition concepts for players to learn. The diet of most players is outrageously poor when you consider the demands they are placing on their body.

Another key component of the TLA is strength training. This initially begins by working out compensations with specialized circuits. As players adapt, focus moves onto strength and power. With our integrated programming each stage is progressive. The guarantee when the TLA soccer program concludes in August is players will begin their in season at a new and much higher level of performance.

Today, long time mentoring client Ben Fisk just scored three against Brazilian Corinthians. When I saw him last Wednesday we went over
movement, good nutrition, and an in season strength routine that excited his nervous system for explosiveness. Before his trial in the Netherlands Alex Morello spent a month applying TLA concepts. How did he do? He signed pro.

We have two other Whitecap clients who are learning the TLA soccer approach. They too will accelerate. TLA soccer would not only love to work with youth Whitecap FC soccer players, but also be open & willing towards training any young player looking to take their game to the next performance level.